Lots of activity this weekend:

#1 – Another coat of high build primer was applied and block sanded. Block sanding is very time consuming but I’m starting to see very good results. The pattern of colors that the primer/filler makes after sanding started off looking like a topographic map of the Himalayas; with each coat I can see it’s flattening out substantially.

#2 – The pop-out frames were glazed, sanded, and re-primed.

#3 – The black parts in the latest round of small parts (mostly sunroof parts) were painted black.

#4 – The low spots on the body got yet another coat of high build primer after #1.

#5 – The seat frames were partially sandblasted, but the effort was cut short since the blaster kept clogging. I rebuilt the blaster and it should perform much better on the next rain-free blasting opportunity.

#6 – Holes in the drivers side front lower seat frame were welded shut. I forgot to take pictures after the welds were ground down, but it turned out very nicely. 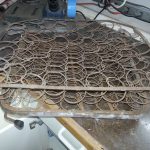 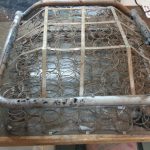 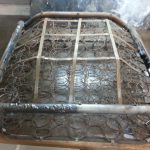 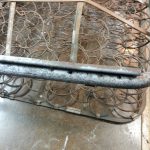 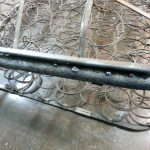 The search continues for the elusive passenger side front lower seat frame. This seat is specific to the optional ‘walk-through’ configuration that this bus has. Although the ‘walk-through’ option was heavily advertised it was expensive, so the minority of buses were built this way. This problem is compounded that through the years, especially during the 1970’s custom van craze, many of the walk-throughs had their bulkheads cut (mine included, but fixed) to install swiveling seats. When the swiveling seats were installed in all these buses the original seats were lost forever, though I’m not sure why they kept the passenger side seat back without the base.

This entry was posted in Bus and tagged Bus, Metalwork, Paint. Bookmark the permalink.