A while back, in anticipation of more log milling, I made a jig for holding the chainsaw level along the length of the cut. This is basically a homemade version of an ‘Alaskan Sawmill’, with a few changes.  Since I processed last winter’s log recently it made room for another in the drying area, so I finally had a chance to test out the jig this weekend. For the first cut a ladder is secured to the top of the log to establish a reference surface.

I opted on not tie the reference block into the end of the bar, since I have a limited bar length. Because of this, I also couldn’t make the reference block adjustable without introducing too much flex. Instead, I set it at the maximum board width I may need, and for all thinner boards I’ll add more wood to the block or log to shim it. This also gives me the ability to cut from both sides for a log that’s up to ~2x the bar length.

Altogether this test seemed to work great, the cut was extremely flat compared to the previous log that was cut free-hand. It was fairly slow-going though since I was using a standard chain; I have a ripping chain on order that should cut faster with the grain, I’ll install it before finishing this log. 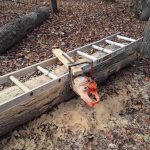 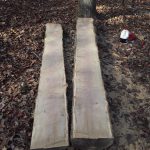 Last fall prior to Hurricane Florence I took down some good-sized white and red oaks. These were great trees but both had large limbs overhanging/threatening the garage, so they had to go. Rather than cut them up for firewood as usual I let them stay where they fell through the winter. Today was unseasonably warm and I took a stab at milling one of the logs. Drying takes a long time, so the point of this was to get at least something started – this way if I don’t finish milling the rest of it for a while I’ll at least have something in the queue.

To make the milling cuts I just free-handed with the chainsaw and there’s a good bit of variance in thickness as a result; to get straight boards I’ll have to deal with this variation at the joining/planing stage. For the next attempt I plan to build a metal guide frame over the saw to allow it to rest level on top of either a ladder laid on the log (first cut) or the level surface made by previous cuts. Also, my saw is a middle/low power model (3HP) and bogged down occasionally. Normal chainsaw chain is meant for cross-cutting and takes too big of a bite for ripping, for the next attempt I plan to modify an old chain into a ripping chain by grinding back some of the teeth – these converted teeth will help clear chips out of the cut rather then cutting themselves and it should mean less bogging down.

Once milled, the log was reassembled with some ‘sticker’ pieces I cut from scrap 2×4’s to create airflow gaps. It’s under an overhang that should provide enough rain protection. The drying happens from the inside out over a long period of time, getting wet from rain only temporarily increases the moisture level on the outside; this dissipates quickly and doesn’t hurt the overall dry time. Drying should take about a year per inch, the slabs are about an inch and a half on average so I may be able to use these as soon as next summer.

We have some ideas for the wood but no immediate plans; this is just a long-term thinking/prep. The white oak is good outdoors and may become some much-needed patio furniture. The red oak may be used to upgrade the fireplace mantel and be used for a headboard and side tables. 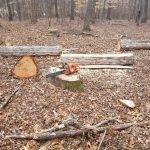 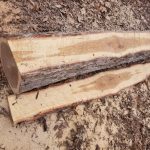 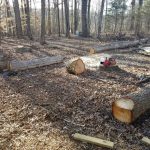 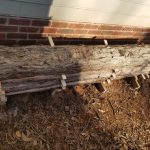 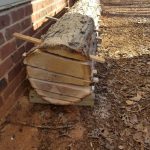 Lots of yard work lately, the tilling and composting last spring definitely seems to have paid off and grass is finally growing even in the shadiest areas. The bus was enlisted into the effort as plant transport, and we also  picked up a big landscape boulder. A big spider joined in with guarding the garden hose, see brick for scale. 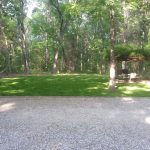 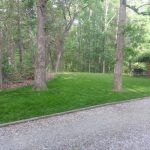 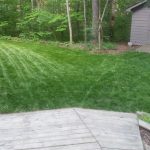 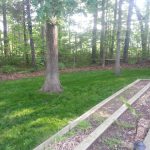 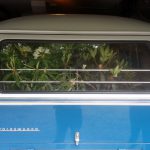 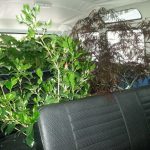 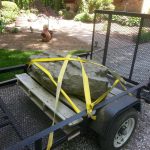 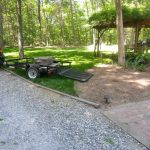 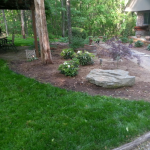 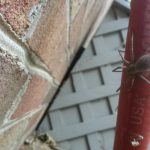 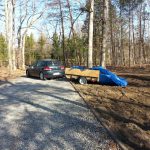 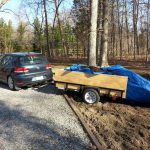 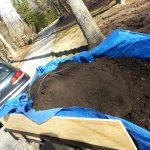