Tonight was my first chance to evaluate the bus after the “meltdown” event of last Thursday. I found a few things of interest:
#1 – Loose linkage on cooling flaps
#2 – Incorrectly adjusted valves

When these were corrected it ran perfectly, and I was finally able to correctly tune it to idle slowly, proving that there was some leakage past the valves. It ran very well and had plenty of power, but unfortunately it also had plenty of loud internal knocking, proving that major damage had been done during the meltdown event. So I pulled the engine, disassembled, and found the culprit: 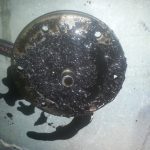 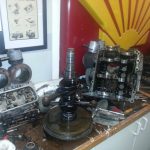 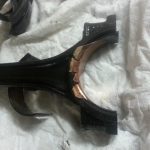 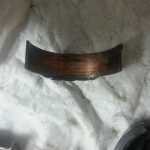 I’m not 100% convinced that the meltdown event was the entire cause of the bearing problems, I found some major pitting in many of the bearings shells that was deeper than the gouging, indicating there was corrosion present. Since the bus has sat with unknown quantities of oil since 1981 this seems logical in retrospect. Also, along with the bearing material there was a lot of sludge clogging the oil screen. This screen had been cleaned prior to running but I think all of the dried oily goop that was throughout the engine case was washed off by the new oil.

This entry was posted in Bus and tagged Bus, Engine. Bookmark the permalink.