I’ve been driving the bus quite a bit this week and so far all is well. It seems happier/smoother/quieter with each trip. If first gear is selected it works for a foot or two then pops out; if it’s held in first it works for a foot or two then grinds. Although I did clean and reseal the trans I didn’t do anything with the internals and I think they’re just too far gone. Luckily the 1600 has plenty of torque to just start in second all the time; it’s a little tougher on the clutch but I’ll replace it when I replace the trans. Replacing the trans has been part of the plan anyhow, the stock trans requires 4500RPM (redline) in 4th gear to go 65MPH; the replacement will have taller gearing to both allow higher speed and lower the revs at normal speeds.

It pops out of 4th too, which is apparently a very common problem. Since it stays in 4th if held, I’ve solved this by deploying a strategically placed bungee cord anytime it’s in 4th for longer than I feel like holding onto the shifter. 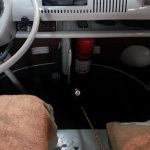 This entry was posted in Bus and tagged Bus, Hacks. Bookmark the permalink.