This weekend I did more work on the CNC machine base:

– Flame straightened the frame to relieve welding stress/distortion. It was my first time trying this so I wasn’t sure about it at first, but it worked great. I put a straightedge on the frame and found which side was convex; then heated that side in several places until it was just red hot. After it cooled the straight edge showed a much smaller gap in the middle on the concave side; I repeated this until the frame was flat in all directions.

– Flame straightening got the frame flat overall, but there were still a few high-spots. These were ground down with a flap wheel until no gaps existed with the straight-edge and the entire frame was perfectly flat.

– Machined holes into the gantry drive racks. The clearance between rack edge and the inside edge of the rack teeth was extremely close. I bought some extra room by grinding down the outside diameter of the bolts some, but it was still very close. For the most part I was able to get the holes centered exactly in in this small space, but there were a few holes that created a notch in the outside edge of the rack; luckily none of the holes interfered with the rack teeth. The other racks will be easier since they’ll be mounted from the back side with partial depth holes drilled/tapped into the back. 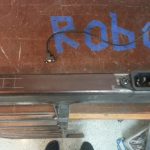 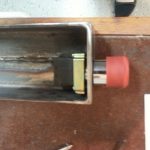 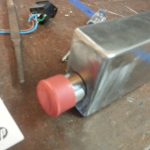 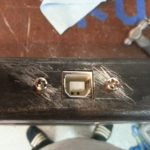 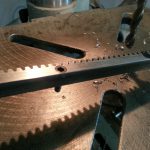 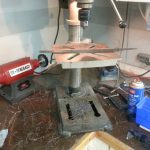 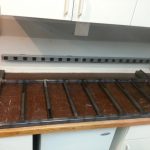 There’s still some fabrication work left to do, but several critical parts (Guides, spindle, etc.) are all on a slow boat from various far east locales. They’ll become the limiting factor, so I’m taking it slow and making sure everything is done as well as it can be.