Tonight the pop-out window frames had dried enough to assemble into pop-out window units, each consisting of: 2 frame halves, 2 rubber seals, and 1 glass pane. Four of these windows open toward the back of the bus and two open toward the front; because of this, and in order to keep the original “Sekurit” logos (1960’s and present glass supplier to VW, now “Saint-Gobain Sekurit”) oriented correctly, there are four different assembly combinations that must be made. The hieroglyph on the masking tape is a reminder as to what window position the particular popout was assembled for; with any luck all the “Sekurit” logos will end up in the right spots. I installed the horn button assembly into the steering wheel; for comparison I’m re-posting a steering wheel picture from 7/2009, it’s come a long way! The “before” picture actually makes it look better than it was since the wheel was badly cracked underneath the steering wheel wrap. 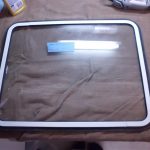 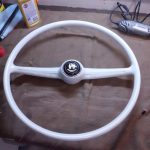 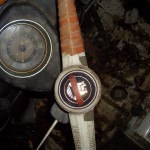