This week’s challenge was a flat tire; I switched to the spare relatively quickly and uneventfully except that when I was tightening the security lug bolt the security key slipped out a bit. When it slipped it broke a little chunk off of the security key and warped the security pattern on the lug bolt. I ordered a new key and lug right away but since I didn’t want to risk the warped lug bolt breaking the new key, I had to come up with some other way to remove it.

First I tried a broken lug extractor – these are cheap and readily available at the local car parts place. They’re basically a regular impact socket with a reverse thread on the inside rather than the usual hex pattern. The theory is that as you loosen the lug the socket’s threads bite into and turn the lug bolt. This actually would have worked great if it weren’t for a collar that’s integrated into the security bolt – the socket only bit into this collar and it spun on the lug bolt without turning the bolt body. It’s almost like they thought of this scenario when the security lug was designed…

Next I tried to cut some small grooves in the bolt head and deform the collar into these grooves so that the collar would be able to drive the bolt out. I think this was an OK idea, but since the collar was glass-hard steel it chipped instead of deforming.

Running out of options, I decided just to weld a nut to the security lug bolt and unbolt it. I had held off on this ‘nuclear option’ because there is a level of risk – the ground current could actually weld the bolt into the hub somewhat or damage bearings/electronics – I chose the ground clamp location carefully and also cleaned it carefully to avoid this. It was a messy weld (prioritizing not damaging the spare) but worked great. I think the heat from welding may also have helped by expanding the bolt and relieving some of the pressure against the spare.

With the lug bolt out the spare was swapped to the (now repaired) wheel and tire. Not sure how a dealer/mechanic would handle this scenario, but I’m guessing it means the welder has now paid for itself for at least the 3rd or 4th time. 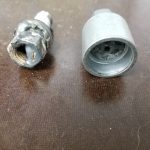 This entry was posted in Uncategorized and tagged Hacks, Mechanical. Bookmark the permalink.