Tonight I rebuilt a leaking hydraulic cylinder on the mower. The leak was coming from the scraper/seal that seals the rod to the end of the cylinder. Unfortunately since the end of the rod is larger than the seal, the cylinder has to be disassembled to replace it. The process went as follows:

#2 – Remove the internal cir-clip that holds the cylinder end inside the cylinder bore. This was extremely fiddly and took 20min or so with dental picks and small screwdrivers to get the end of the clip pulled out.

#3 – Remove the cylinder end and piston/rod from the cylinder bore. The cylinder end’s O-ring catches on the cylinder’s cir-clip groove, so while it moves freely to a position that’s ‘almost’ out of the bore the last bit of movement requires clamping the rod in place and persuading the cylinder downwards with a hammer.

#4 – With the piston/rod/end removed from the cylinder, the nut can be loosened and the piston removed. The piston is a press fit and requires a gear puller to remove and a hydraulic press to reinstall.

#5 – With the piston removed the cylinder end slides off of the rod and the scraper/seal can be replaced. The scraper has it’s own small cir-clip that’s much easier to remove.

#6 – Re-assembly is the opposite of assembly, while I was at it I also replaced the cylinder end O-Ring. 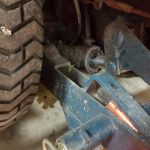 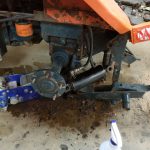 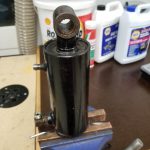 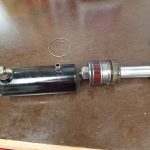 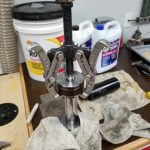 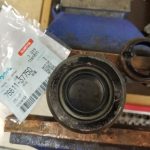 After the rebuild the mower no longer has any hydraulic leaks; the last remaining leak is an engine oil leak that I’ll be tracking down next…

This entry was posted in Uncategorized and tagged Hydraulics, Mechanical, Mower. Bookmark the permalink.