Hurricane Michael hit our area hard and took out power for almost 5 days. Luckily the small generator we already had was enough to keep the fridge running and some lights on, but not much else. The small generator is 120V only, so it also was not able to power the 240V well pump; 4 nights without running water was not fun. It’s not likely we’ll have another outage that’s this long for a while, but we have had a number of shorter outages that seem to indicate that this will be an ongoing problem – a bigger generator would be nice.

With that in mind we started looking at options; there are a number of ‘off the shelf’ options out there for whole-house standby power, but most of them are very pricey both to install and to run (propane particularly) and we couldn’t justify the cost for something that gets used so infrequently. What did seem to make some sense though was rolling the dice a surplus military generator; the prices are very low (when the condition is unknown), they’re way over-built, and are made to be repaired easily.

I bid on and won an online surplus auction for a diesel generator and picked it up outside our friendly neighborhood military base. It was a fairly easy move at ~1200lb; at pickup I just dragged it onto the trailer with a winch and to offload I tilted the trailer and winched it back down with iron pipes underneath as rollers.

To get it running I first put in new batteries (2x 12v car batteries) and troubleshot some miscellaneous electrical issues (broken connections, dirty switch contacts, etc.). From there it would crank but not run; bleeding the air out out the fuel lines fixed this and it started OK. Once running there was an erratic low frequency rattle that I traced to a bad rotor bearing on the generator head. With this bearing replaced it then ran smooth/quiet. The last issue was twitchy voltage regulation that I traced back to a dirty potentiometer; with this cleaned it held a stable 240V @ 60hz under a variety of loads. Along the way it also got an oil/filter change and a coolant flush/fill.

Altogether this was a very quick project, just a few hours to get everything sorted out. Up next will be setting aside some space for it (probably combined with a new area for trashcans and firewood) and getting it wired in with a manual transfer switch. It’s a “10KW” generator but that rating is on the very conservative side; in reality it’s closer to a 15KW or more consumer unit whose ratings are on the optimistic side. This should be enough to run the lights, TV, well, microwave, and at least one zone of HVAC. 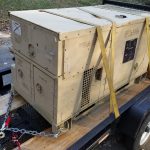 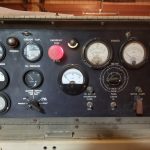 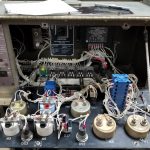 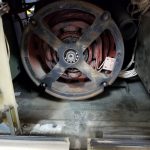 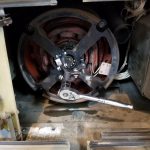 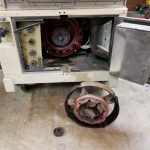 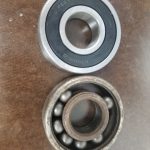 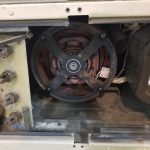 This entry was posted in Uncategorized and tagged Electrical, House, Mechanical, Rigging. Bookmark the permalink.